THE NIGHT THE GHOST GOT IN By James Thurber – Summary 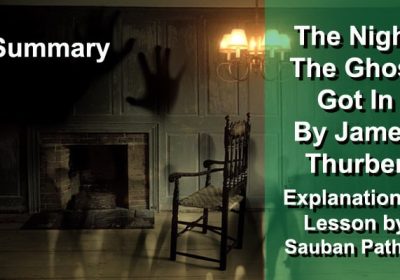 This is a story of one night – Titled: The Night the Got in – the author’s house. These extracts are from a book by James Thurber : “My life and hard times”. It is an auto biographical story that means the author is writing about himself. But it is a fictional account.

If you cannot see the youtube video embedded in the post please copy past the given link to Watch: https://youtu.be/GHqAkVlfbe0

The story starts with the author coming out of the bathroom while drying himself. That’s when he hears footsteps downstairs near the dining table. He wakes up his brother Herman.

They go to the back stairs to listen to footsteps. Herman got scared, ran back into his room and slammed the door shut. James too slammed shut the staircase door. All the commotion woke their mother who came out and demanded to know what was happening. When she did not get a proper answer she thought there was a burglar downstairs.

Also Read: How to Memorize Things You Study

The police came along with some reporters. They searched downstairs and when they found nothing they came upstairs to tell mother. That’s when they heard the author’s grandfather in the attic. They rushed upstairs to the attic. Grandfather was an old man who believed he was still in the war and as soon as the police entered the attic he started shooting at them.

After the police managed to save themselves and come out of the attic, one of the reporters asked James about the matter. James told him about the ghost. Hearing this, all the policemen left.

Students of Maharashtra State Board can help themselves in understanding James Thurber’s story The Night the Ghost go in. These extracts are taken exactly as they have been given in the Board Text Book of 10th standard English Kumarbharti English medium.

Given here is a summary of James Thurber’s The Night the Ghost go in. A full video explanation of The night the ghost got in for the convenience of the student so that they can do last minute revisions during exam or re-look whenever they want as per convenience. Therefore, The night the ghost got in full story has been presented here. All the three parts of the Kumarbharti Text Book of Maharashtra Board have been presented for the students.

The night the ghost got in English explanation with visuals for the students so that they do not even need to keep the Kumarbharti text book in their hand while revising.

The night the ghost got in with Hindi explanation so that they understand the story well and are armed with answers to comprehension questions of the story in the exam. At the same time these videos can also also be used for story reading by kids who would love to listen to this humorous story with explanation.

THE NIGHT THE GHOST GOT IN By James Thurber Part 1

In this part James hears somebody walking near the dining table downstairs. He wakes up his brother Herman and calls him out of his room. When they looked downstairs they felt as if the steps were walking up the stairs towards them. Herman ran to his room and slammed the door shut while James slammed the staircase door. The commotion woke their mother and she came out.

She asked what was going on downstairs. James realised that she had heard the sounds too. When they did not answer she thought it was probably a burglar. Mother decided to call the police. The phone was downstairs and she hurled her shoe at the neighbours window to wake them up and ask them to call the police.

If you cannot see the youtube video embedded in the post please copy past the given link to Watch : https://youtu.be/j1qbbSOZW2A

THE NIGHT THE GHOST GOT IN By James Thurber Part 2

In this part the neighbour – Mr Bodwell (mother breaks his window glass with her shoe) looks out of the window very angry. Mother shouts and asks him to call the police.

The police came very fast. There were a few reporters with them. They knocked on the door, but mother did not allow James to go and open the door. So the police broke the door down. They looked everywhere downstairs for burglars, but did not find anyone.

If you cannot see the youtube video embedded in the post please copy past the given link to Watch: https://youtu.be/E2_UBq1RnOE