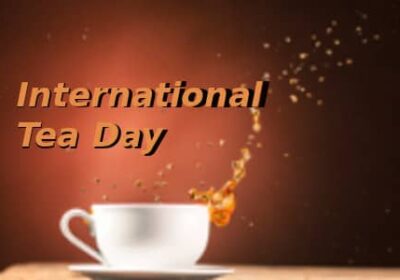 Tea is an aromatic beverage and the second most popular drink globally, next only to water. It also has the most loyal consumers around the world. For some people, tea is an essential part of life, and their day begins with a cup of tea.

China is currently the largest exporter of tea while India is the second-largest tea exporter globally. Although the domestic consumer consumes 80% of tea produced in the nation.

The plantation of tea requires rigorous care and effort. Thus, to draw the attention of the government and public to the problems hampering the tea production and how tea growers, plantation workers, and tea consumers are being affected by the global tea trade, international tea day is observed every year on May 21.

Tea was first discovered in China in 2737 BC. It turned out to be stable in Asia and became a part of Asian culture. Further, it became the most demanding drink that possesses medicinal qualities. To break the Chinese monopoly, Britishers introduced the tea crop in India in 1824, and since then, India has become the bulk producer of tea. India produces around 900,000 tons of tea in areas like Assam, Darjeeling, and Nilgiri.

For the first time, tea day was held in New Delhi in 2005. In 2015, the Tea Board of India sent a proposal to the UN food and agriculture organization to recognize the Tea Day at the international level. So, in 2019, the UN general assembly combined tea day in numerous countries to make it one a single day. UN decided to observe the day on May 21. The aim is to ensure the availability of tea worldwide with the support of sustainable agriculture. Although the UN approved the proposal on Dec 21, 2019, the first official international tea day was observed on May 21, 2020. As the tea production season in many countries begins in May, the month was selected to mark this day.

Tea production is a great source of income and export revenues for many developing and poor countries. It is a labor-intensive sector and provides numerous employment opportunities in economically disadvantaged areas. It is one of the most crucial cash crops and can help in rural development and poverty reduction in developing countries like India.

Tea from Assam is a lesson from Class 10 about Pranjor and the story of tea. Where tea was first grown and the journey of tea into India.